Over the summer, we conducted an online survey to get a feel for what potential extensions to GeoPackage people were most interested in. The candidate extensions came from a wide range of discussions with people inside and outside of OGC. The survey was anonymous and open to the public. The timestamps suggest that we got participation from across the globe.

The survey had three parts[1].
I produced the chart below in mid-August[2] and the results speak for themselves. 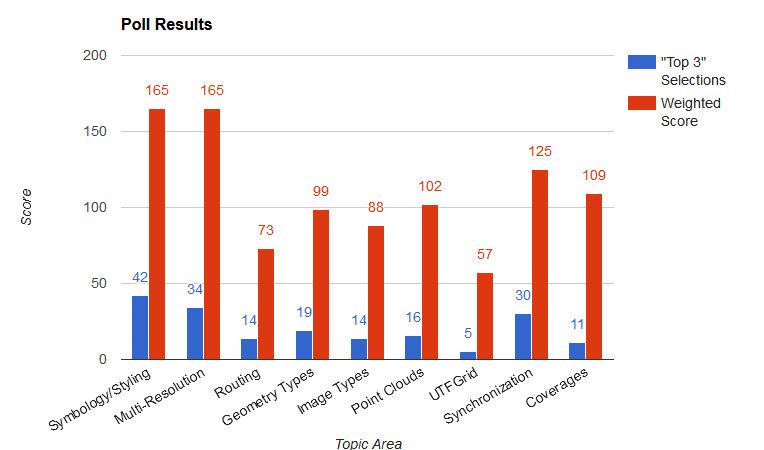 We plan to address symbology and styling next[3]. Our next step is to gather input on the desired use cases for this extension. This will be captured in a discussion paper that will be presented to OGC at an upcoming Technical Committee meeting. If you have any thoughts on this topic, let us know! If you comment here, over email, or on Twitter, I will be sure to see it.
[1] If I had a chance to do it over again, I would allow participants to provide free-form comments.
[2] The poll is still out there and responses continue to trickle in but it doesn't look like they will change the overall results significantly.
[3] Meanwhile, we are going to evaluate whether our recently published guidance on feature data is sufficient to cover the multi-resolution feature data case.
Posted by Slar at 8:00 AM No comments:

One Geometry per Table

Note: This post was mostly written by another GeoPackage SWG member, Thomas Neirynck of Luciad. Any editing mistakes are mine.
The GeoPackage encoding standard mandates in Requirements 22 and 30 that vector feature user tables shall only have a single geometry. This is advantageous for two reasons:
This restriction should not be seen as a limitation. Since a GeoPackage is a relational database, users can create rich data models to describe the required scenarios. Instead of adding more geometry columns to a single table, the general approach is to extract these geometries into a separate table, creating a one-to-many relationship between the geometries and the feature.

Because of the feedback we received on this topic, we recognized that we needed to produce some guidance to aid developers in producing compliant GeoPackages that handle non-trivial scenarios. This guidance has been published on geopackage.org. As always, we encourage public input on the specification itself and anything else that we can do to make things easier for the community.
Posted by Slar at 7:50 AM 1 comment:

Currently the GeoPackage Standards Working Group (SWG) is developing an extension to support the storing of elevation data in support of visualization and analysis operations[1]. We see this as a good thing because without it, there is no interoperable way to exchange elevation data in SQLite[2]. In the interest of simplicity, we are basing the design on the existing tile model. We use PNG files to store the elevation values as unsigned integers and there is an additional extension that supports the use of TIFF files to store floating point values.

So how does this extension stack up in my list of things that make a good extension?
Our next step is to conduct an interoperability experiment[3] to investigate the degree to which implementers are able to produce GeoPackages that conform to the extension and their software is able to use compliant GeoPackages effectively. We are in the planning stages now and are looking for participants. We plan to do the bulk of the work in January and February and present the results at the OGC Technical Committee Meeting in March 2016.

If this experiment is successful, it proves both the technical approach and the commitment to implementation. At that point, the SWG will be ready to adopt the new extension.
[1] The ongoing work is available at: https://github.com/opengeospatial/geopackage-elevation
[2] As with any other extension, if a client does not conform with it, it will not see the elevation data but it will be able to see the features and tiles as it always has.
[3] See the Activity Plan
Posted by Slar at 12:16 PM No comments:

It is no secret. Coordinate reference systems (CRSs) are a constant issue in the geospatial community. Unfortunately they are a fact of life for many of us[1]. The GeoPackage standard requires that the CRSs in use be defined[2]. The standard encoding for CRS definitions that was available at the time was included in OGC 01-009 but that one is pretty dated and it has been causing problems in the field. In response, OGC recently adopted 12-063r5 to bring things up to date. The problem is getting people to start using it.

It is a classic chicken and egg problem. Consumers do not want to build support for data that isn’t being produced yet. Providers don’t want to produce data that consumers can’t read. Naturally, we’ve been asked to break the cycle. The traditional approach is to issue a new standard version that cites the new document but as mentioned previously, this is something we’re trying to avoid.

Our solution is to create another extension and to let a specific domain try it out. In this case it is the US National System for GeoINT (NSG) which represents the US defense and intelligence community. NSG has been working on a profile for GeoPackage which constrains and extends the standard. Among other things, the profile will contain an extension that updates the reference for CRS definitions from 01-009 to 12-063r5. Systems designed to work in this domain will be mandated to support the extension but others can adopt it at their own pace.
[1] For example, NGA does not support the use of Web Mercator and has developed other CRSs for use in tiles.
[2] There are three defaults, one for EPSG::4326, one for undefined geographic systems, and one for undefined cartesian systems.
Posted by Slar at 8:00 AM 3 comments: